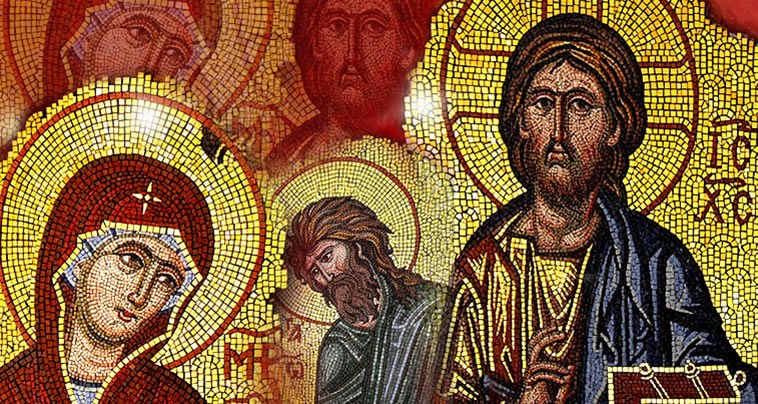 With the average history of mosaic meant the timeless aspect of concrete art from prehistory to modern times, with relevant historical cycles of boom, decline and renaissance of interest among artists, earlier or later in the imaging power of the mosaic composition. The historical background of the art of mosaic is divided into three main phases, with detailed individual bouts:

It should be noted that this classification does not take into account the evolution of the art of mosaic in the American continents in the pre-Columbian period. The introduction of this specific context for this art classified chronologically at the end of the Medieval Byzantine-phase of the so-called Western world.

The art of mosaic draws the story of the fourth millennium BC. / BCE., When used cones fired clay (terracotta) imprinted on floors or on the ground, for the production of certain ornamental motifs [3]. Among the earliest mosaics artefacts included Mesopotamia walls or columns of Uruk, where the cones create geometric patterns [4]. There uncovered walls, poles (apsidostates) and columns decorated with cones limestone or clay, submerged in dye, impressed in pitch.

In the middle of the 3rd millennium EuP panels adorned with sketches crafted from shells, lapis lazuli (lapis lazuli) and colored limestone, also in repousse pitch. Such panels were discovered in many cities of Mesopotamia, especially in Ur. However, the foundation of the Greek tradition in manufacturing floor mosaics is probably the mosaics were made in Assyria and Phrygia with river stones (pebbles) in later times, during the 8th and 7th century. PRM. Two such mosaics excavated in Assour by the German archaeologist Andre Walter (Walter Andrae), the temple complex of Anu-Adad (Anu-Adad) [5].

In Till pt Till Chougiouk (Tille Höyük) in SE Turkey, in settlement of neochittitikou State Koumouk conquered by Skarga II of Assyria (c. 721-705 EuP), excavated a two-storey house with a long narrow terraces lined around of an enclosed interior courtyard. The yard was covered with a mosaic floor 238 white and black squares (chessboard) and four red squares arranged so as to indicate the main entrance of the dwelling [6]

Significant change of use of the mosaic floor observed in Phrygia. The Gordium the capital of Phrygia, was richly decorated with floor (pebble) mosaics early as the 8th century PRM. Three of these mosaics were uncovered in megaroiod buildings destroyed by the Cimmerians in the late 8th early 7th century PRM. Dated as modern mosaics of Assyria, but have a different use in the field. Used in major lofts and not outdoors, and the technique is considered excellent [7].

As part of the Mesoamerican artistic production, the term mosaic finds application not only in architectural surfaces, like the Greco-Roman world, but in a variety of objects, among which include vases, shields, masks, human skulls, handles manuals and devotional figurines. The means of decoration is broken stones and other hard materials.

The Greeks in the 5th and 4th century PRM. promoted the mosaic as an art form with precise geometric patterns and anthropomorphic or thiriomorfika patterns. The mosaic of the classical world usually adorned the house-usually the dining room and the anteroom. This implies a close relationship between the mosaic and the symposium and illustrated clearly in Dionysian themes and concentric compositions, designed so as to show the same patterns in all diners, regardless of their position in space. As indeed participated in the symposium only men, this decoration dawned discrete boundaries between androniti and loft.

Many, pebble mosaics are kept in two separate archaeological sites, and Olynthus Pella in northern Greece. The mosaics of Olynthus EuP dating to the 5th century. and is mostly square or circular configurations with simple contours and friezes around the central mythological theme. Quite elaborate considered here use light and dark chip. The forms created with white stones in black or dark blue background. Smaller black stones used for the outlines. The tesserae are uniform in size and unformed and central issues given attention to detail.

In the Hellenistic period rise buildings using the mosaic decoration in different areas from the symposium or the decor in androniti. It is also clear that a very large portion of the space in the Hellenistic house was dedicated to entertaining guests. The drastic increase in the use of mosaic in this period seems to be the result of growing prosperity, combined with customary changes, which made it more acceptable to her show. From 200 PRM specially designed chips (tesserae [8]) was used to perform additional details and color accents projects. The use of small tesserae enabled imitation of paintings, as seen mainly in surviving works of Pella and Pompeii later.

The mosaics of this particular period showed many stylistic and technical innovations, but to allow time for their identification. There are mosaics of the 3rd century PRM. following the technique of microchipping, but the missing link in the chain escapes. The technique was perfected in one of the royal courts of the Hellenistic kingdoms, probably in Alexandria or Pergamum, where disclosed projects of particular finesse and technique. Around the middle of the 2nd century. EuP art of mosaic captures the rich houses of the Hellenistic world, from Spain to Afghanistan. The peoples of the Hellenistic world adopted the art of mosaic with other aspects of the Greek way of life as an expression of Greek identity or as a demonstration of familiarity with Greek culture [9]. The usability of the mosaic in the architecture of the Hellenistic buildings hires a peculiar character, and becomes the means of physical separation in cases where there is enough space in smaller buildings. The show social status requires the existence of several sites and this symposium is made possible thanks to the architecture now uses the art [10].

In the Hellenistic period, there are two different styles, the east and the west. The characteristics of these two distinct trends are seen most clearly in the early mosaics of Pompeii following the Greek Western tradition, illustrated with scenes from everyday life. The aristocrats of Pompeii sought a design that would show a familiarity with Greek culture, which greatly encouraged the copying or use of eidologikon and stylistic elements of Greek style. The particular market demands of Pompeii seems served by different production techniques. There is evidence of separation between the production of wall and floor mosaics, which were probably of local artisans. [11]

The continuing expansion of the Roman Empire was the right vehicle for the dissemination of the mosaic, although there are significant variations in the level of art. The comparison between mosaics of Roman Britain and those in Italy, suggests that British mosaics are simpler in design and less complete in terms of technique. These issues typically include Roman ritual and domestic scenes and geometric patterns.

With the rise of the Byzantine Empire from the 5th century This art form took on new characteristics. These features include Asian and stylistic influences of genre and the use of special glass tesserae manufactured in northern Italy first and know the general term enamels. The enamels were made of thick layers of colored glass, had irregular surface and contain tiny air bubbles. Sometimes the reverse side was covered with silver or gold foil in order to produce the analog aesthetic result of underlying brightness, an abstract dimension of sacredness, not found in any other period of the art of mosaic.

Thriving even Byzantium, the Moors brought Islamic mosaic art in the Iberian peninsula in the 8th century. Throughout the Islamic world later used stone, glass and ceramic tesserae, but unlike the anthropomorphic representations of Byzantine art-outside the iconoclastic period-Islamic motifs are mainly geometric and mathematical. Examples of such mosaics can be seen in Spain, the Grand Mosque of Córdoba and the palace of Alchampra. In Arab countries developed a distinctive decorative style that was called zilitz and based on prefabricated ceramic shapes that are processed artists to fit perfectly together in the process of covering the space.

In the post-classical pre-Columbian Central America, the Aztec period (1376-1519), the mosaic is used as an architectural ornament average ksi to cover ritual objects. As chips commonly used precious materials such as obsidian, garnet and kallaitis (turquoise). One of the best examples of this kind is the mask of Quetzalcóatl, artifacts of the 14th century. They also revealed buildings covered with mosaic decoration in the archaeological site of Mitla in Oaxaca. The decorative strips in buildings constructed with small stones Offensive different colors and shapes. Other elaborate facades in Ouxmal Maya and Chichen Itza, Yucatan, demonstrate use thiriomorfikon and geometric motifs on the outside of buildings.

Elsewhere in Europe the art of mosaic declined during the Middle Ages, although some tessellate standards used in abbeys or other ecclesiastical buildings. The revival of interest in mosaic art-especially the Byzantine-style in the 19th century seems to buildings such as Westminster Cathedral and Shark Kerr (Sacre-Coeur) in Paris.

In the modern era mosaic embraced also the new art movement, called Art Nouveau (Art Nouveau). In Barcelona Antoni Gaudi Antoni Gaudi together with Josep Maria Giougiol (Josep Maria Jujol) painted remarkably ceramic mosaics in the Park Guell (Guell Park) in the first two decades of the 20th century. They used a technique known as trencadis to cover the surfaces of buildings. Also incorporated in the technical material derived from broken pottery and other objects, a revolutionary idea for art and architecture.

The oldest preserved mosaics are located in the Eastern Mediterranean and particularly in Asia Minor dating to the 8th BC century. From the Eastern Mediterranean, the art of mosaics was handed down in Rome in the 1st BC century. and from there throughout the Roman Empire. The Romans were the first to use mosaics wall applications in artificial caves dedicated to the Muses (Mosaic).

Their great acne know mosaic decorations during the Byzantine Empire. The Byzantines than floor and wall mosaics and they made portable raster images.

The Byzantine wall mosaics filotechnountan with immediate placement of units on specially prepared plaster surface which consists of several layers:

Mortars are fastened together with strong nails with flat heads. Generally the third layer, which was the host layer of tesserae, vafotan with "red earth". The mosaicist worked with blueprint in monochrome with a brown or black color. In Byzantine mosaic tesserae were unequal. Usually very small tesserae used for persons and generally bare parts of the figures, while larger in plain clothes and in the show. All these chips implanted one by one onto the fresh plaster with different gradients, which allow the best use of external light. It is understood that the tessellation were partially and sometimes distinguishes stitch surfaces, but the single reddish color on the plaster ensured the unity of the whole. As is obvious, this is technically difficult and expensive.

In the case of small mosaic pictures, the style is very different. Over the wood lies a layer of wax and gum, which implanted the chips. The size of the chip here is significantly smaller than that in the wall and epdapedia psififidota. Often reach the size of the head of the pin.